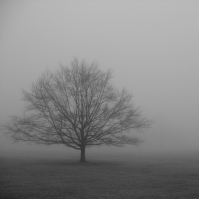 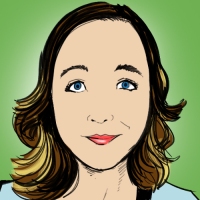 You’re reading a book now that he recommended.  You use the tip of your thumb to hold your place as you gaze at a corner of the ceiling and thump the spine of the book on the arm of your easy-chair.  He won’t have thought of that particular angle on that passage, and you are formulating your thoughts into sentences which you imagine him listening to with a serious nod, the palm of his hand resting firmly on the library counter, the top three buttons of his knit shirt open so that you can see the contour of his neck and upper ribs.  He thumps his hip against the side of the counter, like the book spine against the chair arm.  But really he might have thought of it, you think.  Your gaze shifts along the darkened crevice of where the ceiling meets the wall and you have the urge to run your finger along it.  You try to read again, but the echo of your ill-formed sentences does not allow it.  He is bumping his hip against the counter.

You get up and move to the kitchen, open a can of soda.  You empty half the can down your throat while standing in front of the sink, and stop to gain your breath.  You put the palm of your hand on the counter and test your weight against it.  Your muscles form a long taut line, slightly bent.  You have been thinking of him.  You persuade yourself to stop.  Your heart appends itself to the line of your muscles, a small quivering bag, and it tells you what to think, tells you how to spend an evening, running your eyes along the corner of a room like a white glove looking for grime.  It is silly, and with a few short breaths the small threat of panic passes and you start speaking to yourself in a normal voice.

“Oh, lord, time for a little food.  Let’s see what we got.”  You open the door to the refrigerator.  You exaggerate your movements, and in your mind you exaggerate them further, make them ridiculously fluid and theatrical.  You pick up an egg and turn it over in your hand for the amusement of seeing the plasticity of your fingers, like a magician’s.  You pretend to be considering the egg as a source of food.

“The egg, simple and elegant.  A natural shape, shat out of a hen, white and smooth.”  You laugh and then collapse from your posturing.  Who are you trying to fool?  You are heart-sick and you will make yourself a tuna salad sandwich.  It will be lovely.

[Originally published by the online journal The Scrivenery in 1997. The Theme was the 2nd Person POV.]